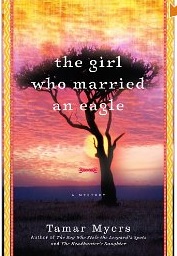 Based on actual events in Tamar Myers life this is the story of Buakane, an eight year old girl who flees into the bush to avoid being the 23rd wife of the local chieftain, Chief Eagle, and of Julia Newton, a naïve 21 year old from Ohio who comes to the Belgian Congo to be principal of a girl’s school that exists to save young girls from becoming child brides.  It is also the story of a people, the Bashilele, and their culture as it comes in contact with the culture of foreign white missionaries.

Along the way Tamar introduces memorable personalities of humor, intellect and charm.   We meet Cripple, an African woman as tall as a six year old child and who carries a monkey on her back, Clementine, aka The Great Distraction, who is the precocious almost ten year old daughter of the resident missionary, and, of course, Chief Eagle who comes with his warriors and slaves to collect his bride and claims he will take Julia as a bride as well.

This is storytelling in its essence, carrying myth and history along with it.  It is part of a series of books based on the author’s childhood growing up in the Belgian Congo.  Called ‘A Mystery’ the puzzles to be solved here are those connected with the interfacing of extraordinarily different cultures and histories.  Find out more at http://www.tamarmyers.com